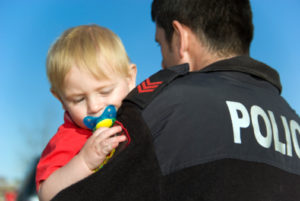 Let’s look at another common example of how police and parenting time disputes come together. Parent A is supposed to take a nine (9) year old boy on vacation. The flight leaves at 7:00 p.m. on a Thursday. Upon arrival at the home of Parent B to pick up the child at 2:00 p.m., Parent B indicates that he is in the pool and will be ready at 4:00 p.m. As set forth in a court Order, Parent A advised Parent B, two months ago, that he/she was taking a one-week vacation with the child from Thursday at 2:00 p.m. to Wednesday at 5:00 p.m., and provided the flight information showing an airline departure at 7:00 p.m. Parent B believes that you only need to get to the airport two hours in advance, thinks it only takes an hour to get to the airport, and believes the Order only allows exactly seven (7) days of vacation (not seven (7) days plus three (3) hours). Again, you are left with your four choices (perhaps a fifth to cancel your vacation).

Obviously, we could provide hundreds of examples of parenting disputes, but the general framework of the two set forth above repeat themselves continually over the summer. Should Parent A call the police? Broadly speaking, the decision whether to put police and parenting time disputes together rests on the attitude of local law enforcement and your relationship with your child(ren). If the police have a reputation for not involving themselves in these disputes, but instead simply trying to mediate and, if that fails, advising the parties to speak to attorneys, you may want to bypass the police altogether. If you and your child have a rocky relationship, having police “force” him or her to attend parenting time or leave for a vacation earlier than they want to leave may further damage the relationship and make future parenting time exchanges more difficult.

If you have reason to believe local law enforcement will enforce the terms of your court Order, then it is perfectly acceptable to contact them if, and this is a big if, there is a significant dispute and you have done everything possible to remedy the dispute prior to calling. A “significant dispute” means you are told that you cannot have your parenting time or you will miss your flight for vacation, not that your child will be ready fifteen (15) minutes later than your Order or agreement says. As far as doing everything you can, what we mean is that on the day you talk to Parent B and your child and try to fix the situation. It means that if you know there is going to be a problem in advance, that you have your attorney intervene prior to the parenting time exchange and, if necessary, get the court’s involvement.

If you find yourself on either side of the dispute, and the police intervene, do not panic! Law enforcement is there to help. While they may not force a teenager to go to parenting time, they will usually use strong language to enforce the Order. If your Order is ambiguous, you need to involve an attorney to make it more specific, as most disputes involve unclear language in terms of vacation time or pick up and drop off time. Regardless, police will likely not take any official action other than producing a report of the situation and advising the parties to contact their attorneys. If you are the violating parent, remember that the report and the officer’s impressions of the situation will most likely end up in front of a judge.

Do not let parenting time disputes turn into wars, with police being used as weapons. A good family law attorney can intervene and help with most of these situations. If you have questions about police and parenting time disputes, contact us at (732) 479-4711 Remember that we will not tell you what you want to hear. We will tell you what you need to know.